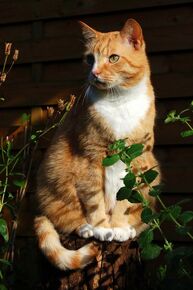 Coolio decided on the day just two months after the death of his brother Merlin also to enter his last big journey. He left our pack shortly after his 16th birthday. Born with me, fell asleep in my arms in the middle of his pack. I miss him terribly. Now the three wise men, Brix, Merlin and Coolio are reunited within less than a year. They were a trio, were often together, they just agreed and were so familiar. Coolio accompanied Brix, like his brother Merlin, to death. They both were at Brix' side, such a strong connection between them three! And all three of them accompanied me thruogh countless ups and downs. Everything is different, nothing is equal without them. Beenie (the last of the three brothers), Gaia, Anyango and Anandi have comforted me, licked my tears, watched over me while I mourned. It's good, that they are here. That makes the loss bearable, but never forgotten.
Farewell my Coolio ♥